Trump-Endorsed candidates are destroying their primary opponents in another round of polling data just days before the August 2nd, 2022 Primary Election.

Earlier this month, The Gateway Pundit teamed up with Cygnal Polling to poll likely Republican voters in the Governor and Senate races. Both polls showed that Trump-Endorsed Kari Lake and Blake Masters lead by double digits.

This proves that Arizona is still a MAGA Stronghold that has long turned away from the RINO establishment ruling class.

President Trump did not lose the state in 2020. The election was rigged and stolen, and the Arizona audit proved it.

According to new GOP primary polls from OH Predictive, Masters and Lake will likely face the Democratic nominee in the November General Election.

Trump-Endorsed Kari Lake is now leading by 18 points over RINO Karrin Taylor Robson, whose fate is only worsening as she gets caught up in scandalous activities. The Gateway Pundit recently reported on another new poll from Data Orbital that also shows Kari with a massive lead.

Lake is capturing 75% of respondents who self-identified as Supporters of Donald Trump, whereas Robson is leading among Supporters of the Republican Party, capturing 62% of that group.

“Masters is in a strong position with a fractured field and will likely be moving on to take on incumbent Mark Kelly,” said @MikePNoble

Breaking: Mark Finchem leading by double digits in the latest poll from @OHPredictive. We must close strong and take NOTHING for granted. We need every vote all the way until Tuesday. #ElectionIntegrity 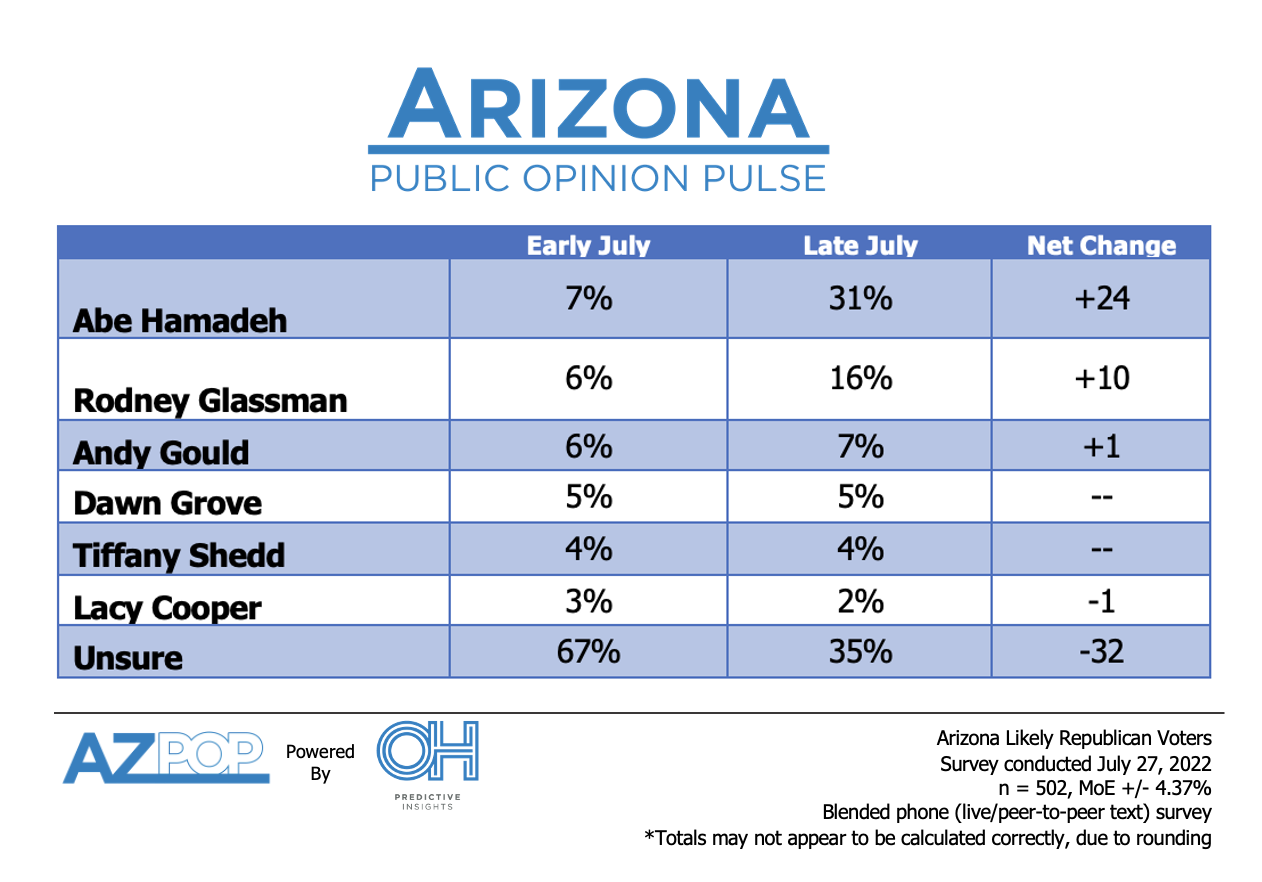 Lake, a former TV journalist, has a nine-point lead, 43%-34%, over former Board of Regents member Karrin Taylor Robson. They are trailed by Paola Tulliani-Zen (4%) and Scott Neely (3%), while another five percent (5%) of likely GOP primary voters would vote for some other candidate and 11% are undecided.

Finchem, a state representative, leads by 11 points, 27%-16%, over businessman Beau Lane in the Republican primary for secretary of state, followed closely by state Sen. Michelle Ugenti-Rita (12%) and state Rep. Shawnna Bolick (11%). Ten percent (10%) of likely primary voters prefer some other candidates and another 25% are undecided.

The power of a Trump endorsement is unmatched.

The RINO-Democrat Establishment is ready to rig and steal another election from this incredible slate of Trump-Endorsed candidates across the state. In multiple Arizona Counties, serious elections concerns are already emerging again.

The Gateway Pundit previously reported that the Maricopa County GOP chairwoman has sided with the RINOs and refused to appoint a ballot signature challenger, as permitted by Arizona Statutes. Every ballot will be counted regardless of its legitimacy, as they did in 2020.

The job’s not done. Turn in your ballot now, or go to the polls on August 2nd, and make sure you fill out that bubble for @KariLake.

This fight doesn’t stop until the bell rings.

The job’s not done.

Turn in your ballot now, or go to the polls on August 2nd, and make sure you fill out that bubble for @KariLake.

This fight doesn’t stop until the bell rings. https://t.co/4Gjf3Hc7Dr

Every Arizona Patriot MUST get out and vote for their Trump-Endorsed Candidates to outnumber the fraud.